Crude prices found strength in the first quarter as the Organization of the Petroleum Exporting Countries (OPEC) and an allied group of oil-producing countries (OPEC+) continued to work towards balancing crude oil markets. OPEC+ pledged to limit crude oil production in early January and reaffirmed a continuation at reduced levels in February and March, despite signs that world liquid fuels consumption was beginning to rise following depressed demand during the COVID-19 pandemic. Crude markets tightened further in February as crude oil production in the U.S. Gulf Coast was severely hampered due to extreme cold weather. There was some crude price volatility near the end of the quarter upon conflicting signs of recovery due to vaccination roll-out hiccups and rising COVID-19 case counts, as well as a week-long blockage of the Suez Canal in Egypt, a critical transportation trade route for crude oil.

North American gasoline demand began to pick up in the first quarter reaching levels by the end of March not experienced since the end of the summer driving season in 2020. Gasoline production was seriously hindered by the deep freeze in the south, taking many refineries offline, some for several weeks. Consequently, gasoline inventories contracted over the first quarter, and with that, gasoline refining margins expanded, rising to a thirteen-month high in March.

Similarly, the demand for distillates in North American strengthened in the first quarter, particularly in February, as frigid weather crippled many areas, increasing home heating fuel use. Distillate fuel use in North America reached levels in February and March not experienced since November of 2019. Aided by refinery outages in PADD 3, distillate inventories which had increased throughout January, began declining in February, falling fifteen percent by mid-March, contributing to stronger diesel refining margins. First-quarter diesel refining margins averaged 1.7 cents per litre higher than the previous quarter. Figures 1 & 2 show the historical movement of retail gasoline and diesel prices in Canada, along with their component prices. 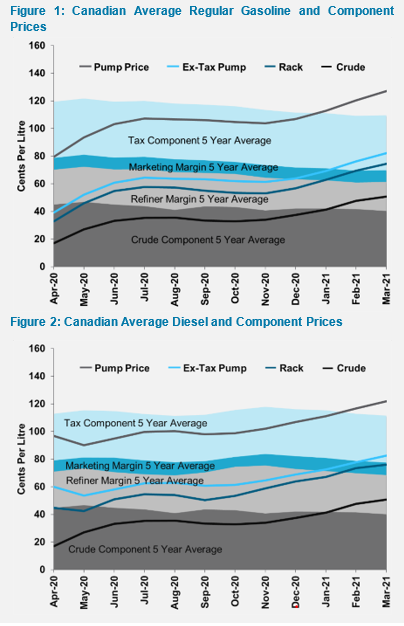 Crude prices increased in the first quarter on increasingly positive economic sentiment and tighter crude oil markets, as OPEC+ continued to limit crude production and PADD 3 experienced severe weather-related production issues. The price of Brent crude (a global benchmark) ended the quarter at 63.13 $US/BBL, 22.6 percent above the end of the previous quarter. Similarly, the WTI benchmark ended the quarter at 59.18 $US/BBL, 22.2 percent above the previous quarter’s finish. Both benchmarks reached price levels in early March not seen since the spring of 2019. Brent’s premium to WTI expanded in the first quarter, averaging 3.06 $US/BBL, up 0.88 $US/BBL from the previous quarter. During the deep freeze in the U.S. Gulf Coast in February, the premium expanded to nearly four dollars, likely a consequence of reduced U.S. production and increased import demand.

The heavy/light crude oil price spread between WTI and Western Canadian Select (WCS) decreased in the first quarter. This may have resulted from lower U.S. demand for Canadian oil, as imports of Canadian crude fell from 3.8 million barrels a day at the end of January to 3.39 million barrels a day by mid-March. The heavy/light spread ended the quarter at 10.31 $US/BBL, down 4.82 $US/BBL from the previous quarter.

The disparity between regional gasoline wholesale prices expanded in the first quarter and was likely a consequence of reduced production in PADD 3 due to the deep freeze. Coastal markets reliant on production from the Gulf Coast would have experienced higher product prices to attract suppliers. Both west and east coast wholesale prices rose over twenty cents per litre this past quarter, while interior regions increased an average of 16.6 cents per litre.
Similar to gasoline, Canadian wholesale diesel prices rose to a 14-month high, driven higher primarily from rising crude prices. Although diesel refining margins averaged higher than the previous quarter, margins were five cents per litre lower than in first-quarter 2020, likely a result of healthy North American distillate inventories levels.

Regionally, Western Canadian wholesale diesel prices expanded more than other regions of the country in the first quarter. This could be a consequence of increased diesel fuel demand in the region as crude oil production recovered and exports to the U.S. increased this past quarter. (Figure 3) 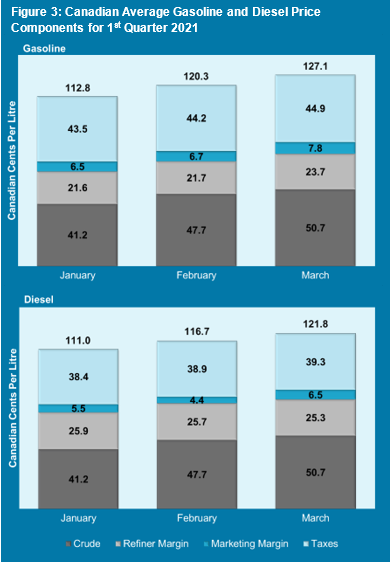 Looking ahead to the next quarter, we will likely see continued growth in gasoline refining margins as the summer driving season draws nearer and demand increases, aided by vaccination roll-out efforts and easing lockdown measures expected in many parts of the country. Additionally, gasoline prices will be pushed higher in the next quarter as refiners switch to summer blended fuel – a more expensive fuel to manufacture, and carbon taxes increase in the majority of provinces.

In contrast, diesel fuel refining margins may see some contraction as seasonal demand for heating fuel declines. However, the effect may be muted as diesel demand is highly correlated with economic activity. With the economy expected to recover in 2021 as the pandemic is expected to wind down, we will likely see an uptick in shipping and an increase in manufacturing and construction, contributing to higher diesel fuel demand.
OPEC’s decision to balance the markets in 2021 will likely lead to a stabilization of crude prices. Should crude prices stabilize at current levels, we will probably see gasoline prices increase in the next quarter, with diesel prices rising at a more moderate pace.

Since reaching a twenty-year low last April, crude oil prices almost doubled in March 2021 relative to the same period a year ago. Over half of this increase happened during the first quarter of 2021. Since December 2020, crude oil prices have increased by 35% to over 80 $CAD/BBL or 50 cents per litre in March 2021, and this has directly translated into higher wholesale and retail gasoline prices (Figure 4). The recent surge in crude oil prices was due to a surprise one million barrel per day production cut announced by Saudi Arabia in early January on top of the existing (7.1 million b/d) production restraint that was executed by both OPEC and non-OPEC countries since the final quarter of 2020. The additional production cut was unexpected and added to the global imbalance in crude oil markets where demand consistently outpaced supply over the previous six months. This directly resulted in a sharp rise in crude oil prices seen during the first quarter of 2021. This crude oil market imbalance is expected to continue at least until the end of the second quarter of this year. Our expectation is that the advancing pace of vaccinations will help the recovery of global crude oil consumption and will push OPEC and non-OPEC producers to slowly unwind their agreed production cuts. The result of these combined actions is a more balanced market during the third and fourth quarters of 2021 (Figure 5). This will likely moderate the sharp rise in crude oil prices seen in recent months and help temper the recent outsized influence on retail gasoline prices. Conversely, if the OPEC-led production restraints were to continue beyond our expected timeline, crude oil prices are likely to remain higher and would translate into higher retail gasoline and diesel prices. 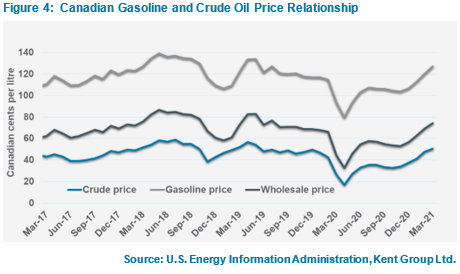 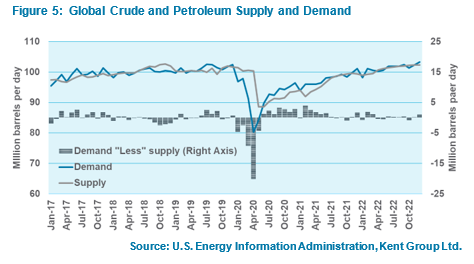 Refineries in Canada process both domestic and foreign crudes to produce gasoline, diesel, and jet fuel. So, they are susceptible to price movements related to these crudes. The most popular domestic crudes processed by refineries in Canada are Western Canadian Select (WCS), Cold Lake Blend (CLB), Mixed Sweet Blend (MSW), and Synthetic crude oil. The price of all the domestic crudes moves in tandem with international crudes, usually trading at a discount to foreign crudes like Brent and WTI due to quality differences and transportation costs associated with moving the crude from the point of production to refineries. The more dominant factor in determining the price discount is transportation costs. If domestic crude production levels exceed the total available export pipeline capacity out of Western Canada, transportation costs will follow rail costs. If production were within pipeline capacities, it would follow pipeline costs, which tend to be much lower. In the months leading up to the COVID-19 impact, Western Canada’s production consistently exceeded total pipeline takeaway capacity and resulted in weaker Western Canadian crude prices. However, weaker prices for domestically produced crudes did not necessarily translate into lower wholesale gasoline and diesel prices in Western Canada. Instead, it resulted in higher refinery margins. As demand recovered from the pandemic lows, Western Canadian crude production increased and has surpassed pre-COVID highs shown in Figure 6. This means that the Western Canadian pipeline takeaway system could become tightly balanced and be vulnerable to pipeline outages or shutdowns, given the currently high storage levels. A pipeline outage or a potential shutdown may result in weaker domestic crude prices as products get stranded in Western Canada. Nevertheless, its impact on gasoline and other product prices will depend on the processing refinery’s location and the nature of the specific pipeline outage, i.e., temporary or permanent. 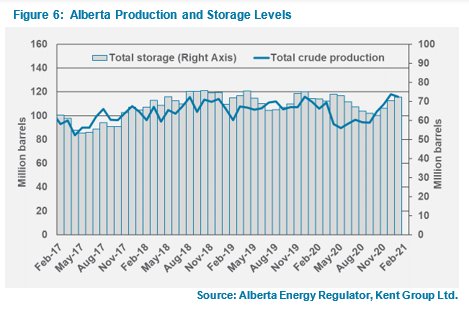 Historically, a crude pipeline shutdown or temporary outage results in domestically produced crudes trading at an additional discount to competing foreign crudes. While this can be positive for domestic refiners who process those types of crudes (but don’t necessarily rely on the shuttered line), these types of pipeline outages are rarely beneficial to consumers and retail product prices. Line 5 is a critical artery for refineries in Central Canada (Ontario and Quebec), capable of carrying 540,000 barrels per day of Natural Gas Liquid (NGL) and light crude between Superior, Wisconsin and Sarnia, Ontario. It is a critical segment of the Enbridge Mainline system that connects Western Canadian domestic crude and NGLs to consumers in the U.S. and Central Canada, and as Figure 7 shows, markets in Ontario and Quebec have become increasingly reliant on imports using this pipeline in the last decade. Our analysis indicates that the existing Line 5 pipeline carries about 20,000 barrels per day of NGLs (mainly propane) to Michigan. The remaining 520,000 barrels per day of light crude, includes deliveries to refineries in Sarnia, Nanticoke, and Montreal. If this line were to shut, it could have two significant impacts on the market. First, the value of Western Canadian crudes would likely decrease as these barrels get stranded in Western Canada. Second, the refineries in Central Canada dependent on these domestic light crudes may need to find alternative sources of similar crudes, likely through more expensive means. This would mean higher costs to access the preferred crudes, which is likely to translate into higher gasoline and diesel prices in Central Canada. Although it is evident that the closure of Line 5 would result in higher retail gasoline and diesel prices in Ontario and Quebec, the net dollar impact on retail prices will depend on the type of foreign crude substituted by refineries in Central Canada. However, this upward shift in retail gasoline and diesel prices will be temporary as retailers seek cheaper imported products (gasoline and diesel) from other regional markets. Consequently, the impact on wholesale gasoline and diesel prices due to a potential closure of Line 5 would likely be short-lived until prices become at par with imported products.

"I have worked for several retailers over the last 20 years and have seen a tremendous change in how retailers...

Organizations that get their location strategy right see better performance, increased return on their investment,...

Watch the demo to see how Kalibrate Location Intelligence can remove the guesswork and provide confidence when...