Approaches to measuring your omnichannel strategy

See how you can use different approaches in your omnichannel strategy to measure the relationship between your in-store and e-commerce sales.

As the retail experience changes, understanding how your online and offline channels interact is more important than ever. Here, we highlight the different approaches to measuring the relationship between in-store and e-commerce sales to help boost your omnichannel strategy.

Distance decay of ecommerce is the effect that distance to a physical store location will have on consumers’ willingness to purchase directly online. This first example looks at the sales penetration for ecommerce, specifically direct to the customer.  On this graph, the Y-axis represents the sales penetration for ecommerce in a given geography, and the X-axis represents distance measured in units of minutes. 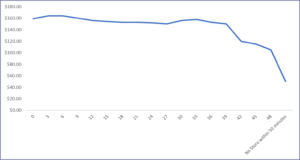 When analyzing ecommerce sales, it is straightforward to append a transaction to a location allowing you to map and measure your performance in terms of penetration rate at a household level. In our example, you can see a relationship between the store and the online sales in that marketplace. In this case, there are relatively high penetration rates, where households within ten minutes are contributing $160, and as you move away, the penetration rate begins to decline.

In some cases, we see spikes in household ecommerce sales on the fringe of the trade area. This might be the case of customers not wanting to make the trip back and ordering online instead.

2: Utilizing a test vs. control approach to measure the impact of changes to a retailer’s store network

One approach is a test vs. control method to understand the impact of changes in your brick-and-mortar network. This method has you compare one store/trade area, which would be the test, to a control group. In this approach, if the test and control are similar in the pre-period and nothing changes to the test for the post-period, it is assumed then they will stay similar. After the change is applied to the test, you would analyze the delta (difference) between the control group and the test to measure its effect on ecommerce sales.

What happens when you close a store in a market?

When using the test vs. control method for store closing, you’ll identify a set of control store trade areas that have a similar performance during a pre-period relative to the trade area of the closing store. The critical assumption is that if there were no change, the closing store’s trade area would continue to perform at the same level. 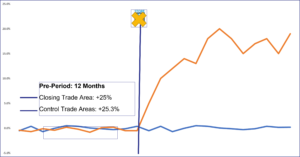 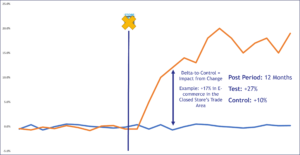 In this example, the orange line represents the closing store’s trade area, and the blue line represents control trade areas (best practice is to represent 10, 15, maybe even 20). The performance in the pre-period is consistent with control trade areas leading up to the store closing. Both are trending up approximately 25%. After the store is closed, the closing store’s trade area significantly outperforms the control group in online ecommerce sales. The delta is about 17%. Based on these results, the store closing drove an increase in ecommerce sales, indicating that customers have remained loyal to the brand and have shifted to ecommerce.

What happens when you open a store?

When measuring the performance of an opening store, we will use the same method but with a different approach.  First, you will need to identify “whitespace” or geographic areas outside of a store’s trade area. The white space would be considered the control. The next step is to compare the whitespace ecommerce performance to the trade areas for the opening store location during a pre-period and then measure the delta between the controlled white space to the newly opened store’s trade area. 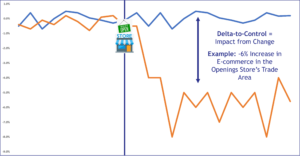 In this example, the blue line represents the control, or whitespace, and the orange line represents the trade area in which a store will be opening. In the pre-period, both are growing at a similar rate; when the new store opens, there is a -6% in the delta to control, signaling a decline in the trade area’s ecommerce online sales compared to the control. Based on these results, the store opening negatively impacted ecommerce sales, indicating customers have shifted from online to shopping at the store location. This example shows that store opening negatively impacted ecommerce sales. Still, it is essential to understand that every retailer is different and that some may see an increase in ecommerce sales when opening a store.

Finally, as we see this growth of ecommerce and specifically ecommerce growth that doesn’t involve the store, do we find a relationship between in-store and online sales growth, and specifically, are we seeing transference or cannibalization? Are we seeing brick-and-mortar stores lose out on potential growth because customers choose to shop online instead?

In this example, the retailer’s stores have been divided into quartiles based on brick and mortar trade area comp performance. To the right, the first column represents the average brick-and-mortar comps, and the second column represents the direct-to-customer comp performance. Here we can see that the highest brick and mortar comp group has the lowest ecommerce or direct-to-consumer sales, and the lowest comp group has the highest DTC growth.  This indicates that there is likely cannibalization between ecommerce and store sales.  If store sales are being cannibalized by online performance, it can put pressure on a store’s P&L and require changes to operating costs (labor, occupancy) to stabilize.

Find out more about how Kalibrate can empower a successful omnichannel strategy through our site selection and marketing solutions.

The Kalibrate fuel round up: January 2023