Super Bowl LVI: Where are the Chargers?

After the big game at SoFi Stadium, Inglewood, CA, we thought we'd take a look at the EV charging infrastructure to serve visiting home fans.

Super Bowl LVI took place at SoFi Stadium, Inglewood CA between the Cincinnati Bengals and the Los Angeles Rams, with the Rams taking the glory.

As part of our work on the growth of electric vehicles, we thought we’d take a look at the local fans, their journeys to the stadium, and the EV infrastructure in place to service those who’ve made the switch to electric cars. 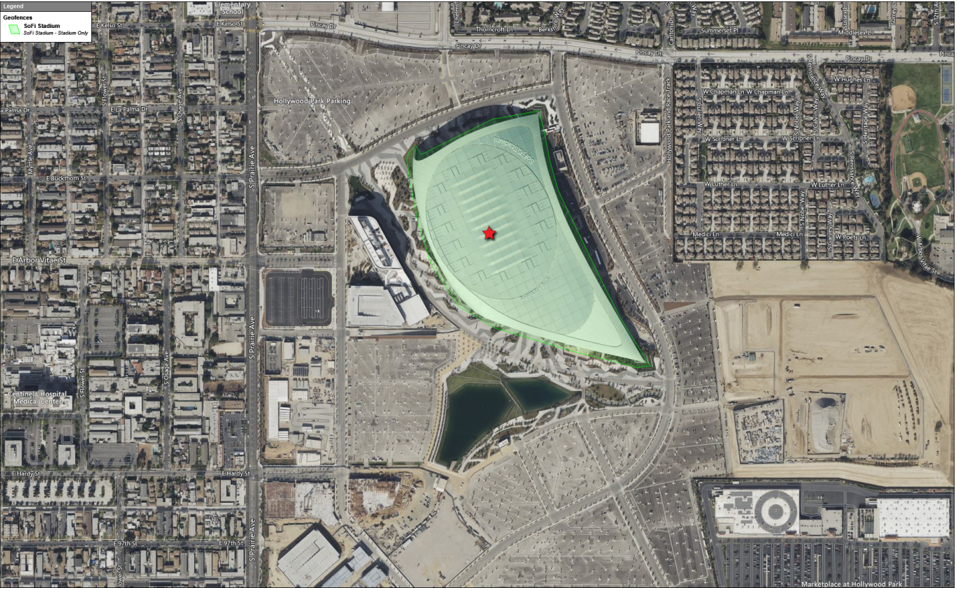 SoFi Stadium is located in Inglewood, California, with a capacity of 70,000 – expandable up to 100,240. Construction began in 2016 and the venue opened in September 2020. The cost was estimated to be $5-6bn including development – yet there was one piece of equipment that should have been installed that was missed, EV chargers!

The stadium draws local visitors from a broad area stretching from Santa Barbara to San Bernadino, San Clemente, and further afield. The heaviest concentration of visitors comes from the central LA and Hawthorn/Manhattan beach area.

If we overlay the EV adoption segments, we can see a heavy concentration of ‘innovators’ – those consumers who are first to purchase EVs – located in Manhattan Beach and north of Santa Monica towards the Hollywood Hills.

Adding the ‘early adopters’ – the next segment to purchase EVs after ‘innovators’ – we see how adoption creeps closer to the stadium itself. The expansion of EV drivers from the suburbs into more urbanized areas becomes apparent.

Interestingly, the areas with higher volumes of trips to the stadium are the same areas that have greater concentrations of EV innovators and early adopters. It is expected that visitors to the stadium are more likely to be EV drivers than a sample of the general population of the area, and this may present a challenge and an opportunity! 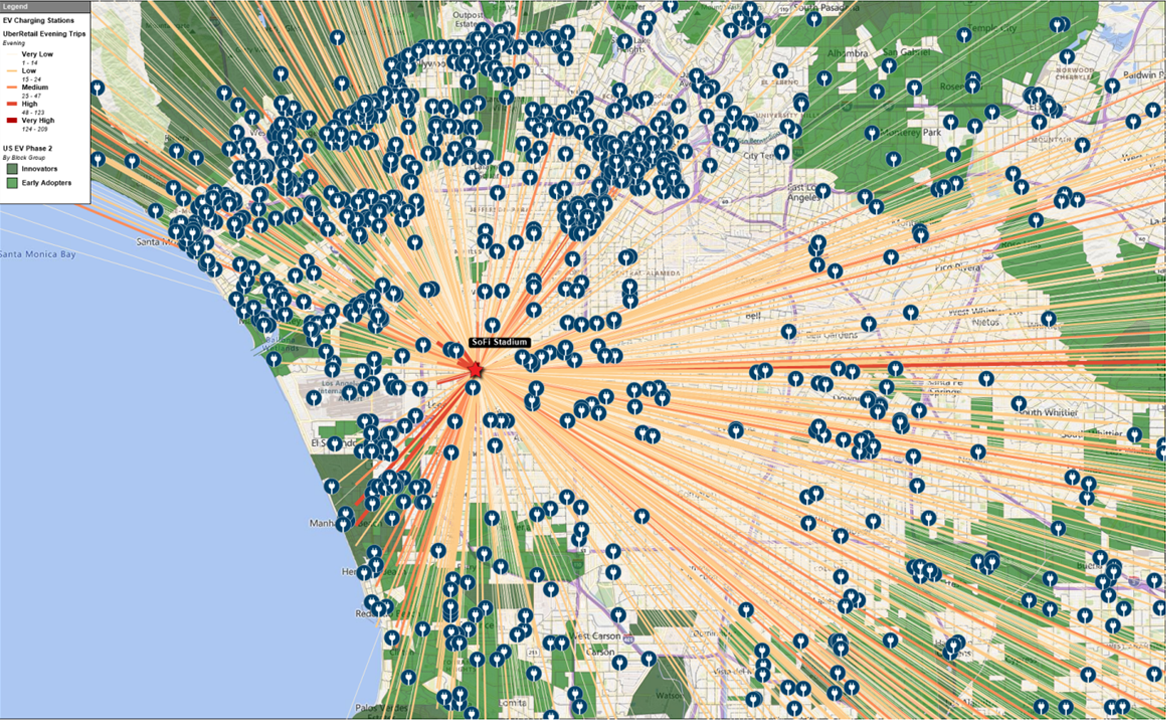 To understand how these EV consumers are currently supplied from a charging perspective, we can take a look at the existing charger network. At present, there is a heavy concentration of charging facilities within residential areas and en route to Inglewood. The transient routes are generally well serviced, particularly to the north, at the current stage of the EV adoption curve.

However, the areas to the east of the stadium are currently underserved on transient routes. 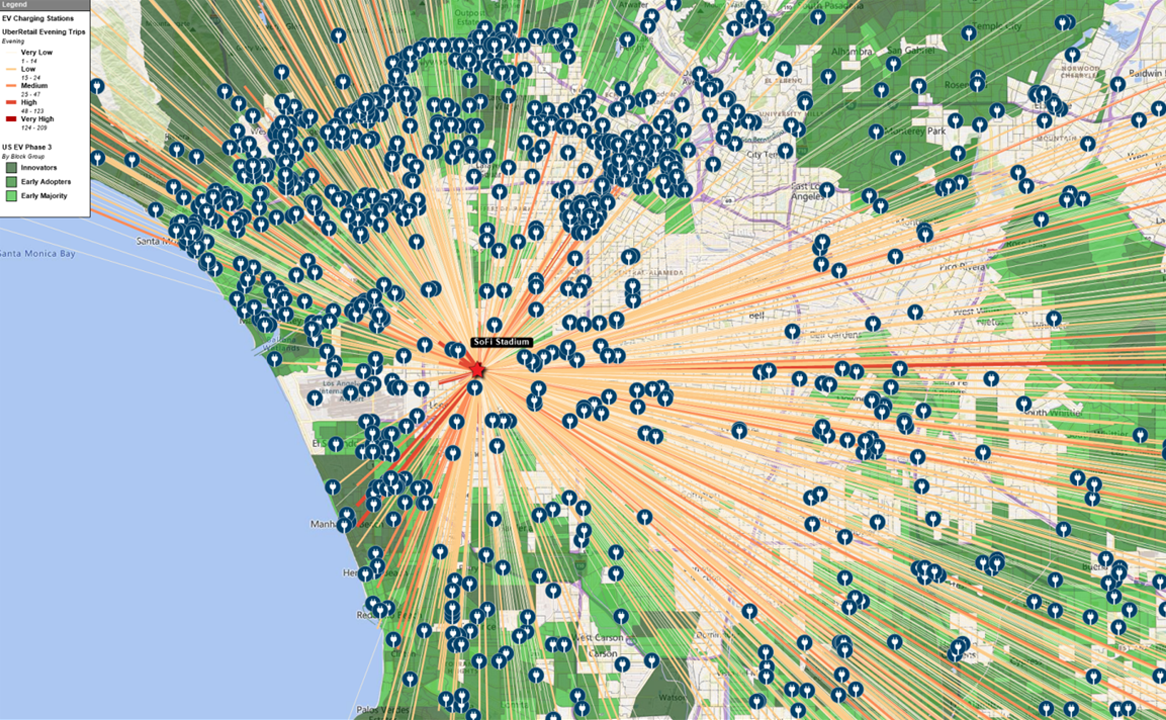 Overlaying the ‘early majority’ shows that this presence of chargers may just become inadequate once adoption gathers pace towards mass ownership. There are likely to be areas of unmet demand, particularly to the east of the stadium. There is the potential for this to be met by improving the charging infrastructure. 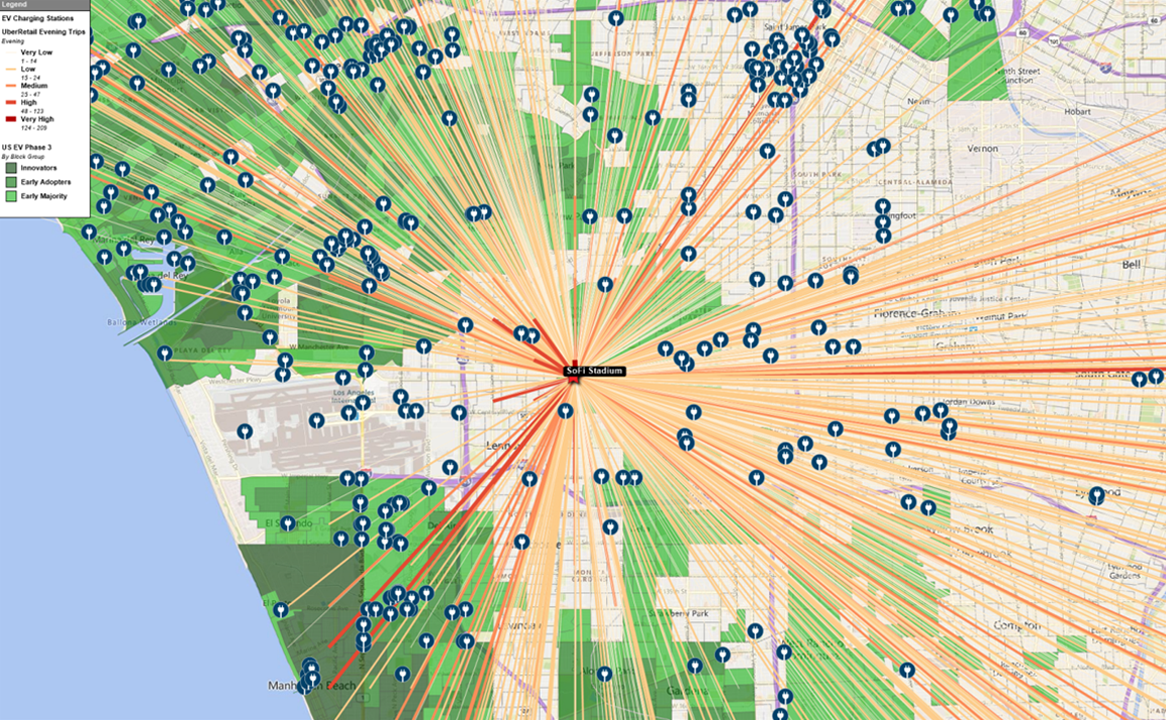 When we look closer at the area surrounding the stadium, the concentration of chargers becomes sparse. SoFi Stadium is a major point of interest, drawing visitors not just from across Los Angeles, but also travelling fans from further afield.

The opportunity for businesses in the area with the right offering to provide charging services to fans visiting the game is significant – especially as we’ve identified the propensity to buy an EV based on the segmentation profile of those visiting the stadium.  There is also an additional opportunity when we reach the ‘early majority’ stage.  This segment is more prevalent around the immediate areas surrounding the stadium, and may not have off-street parking. 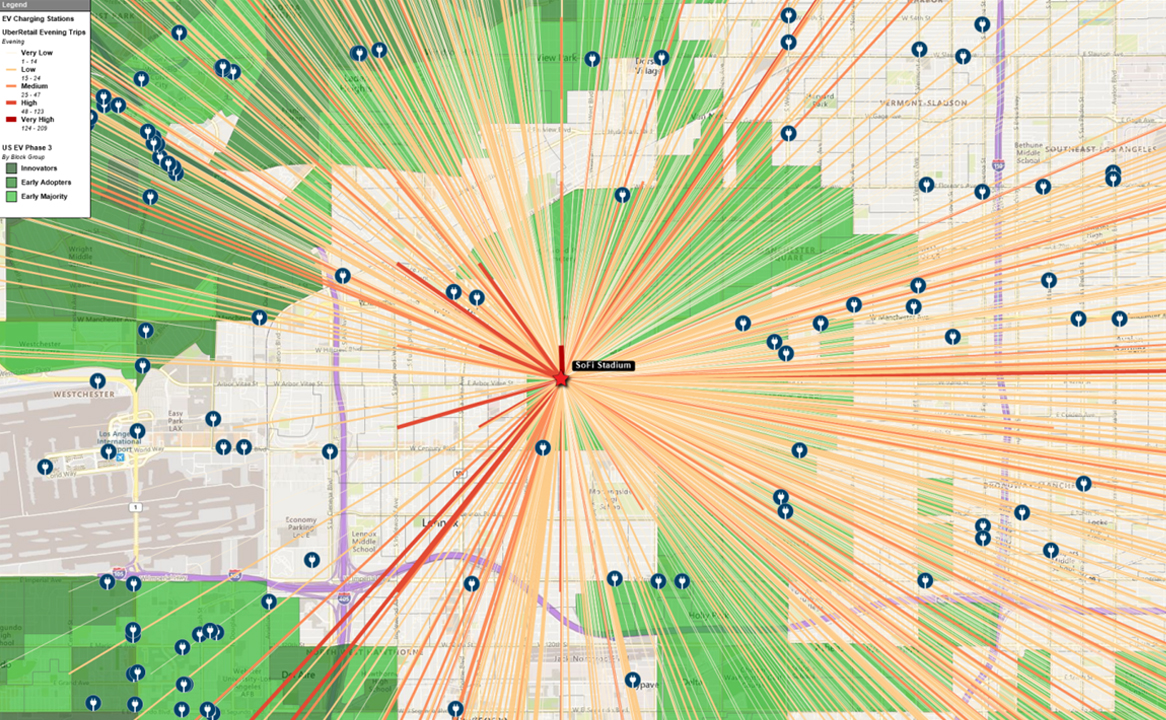 SoFi Stadium itself has no charging facilities – and there are very few options in the immediate vicinity. This presents an opportunity given the customer profile of visitors, for both the stadium and businesses in the surrounding area to install chargers to cater for fans.

Had they been in place this weekend, it’s likely those businesses would have found their charging facilities in high demand. By the next time the stadium hosts a Super Bowl, we’d expect the picture to look very different both in terms of adoption and charging infrastructure.

If you’re ready to get started on your EV strategy, speak to Kalibrate or read more about our support here.