EV adoption: A study in Chicago

As we're heading out to Chicago for this year's NACS event, we thought we'd take a look at EV adoption and the current fuel network, to see if we could spot any untapped demand for retailers to roll out charging facilities, both now and in the future.

When retailers approach Kalibrate to help them assess the viability of installing electric vehicle chargers at their locations, they’re usually keen to understand where demand exists.

Let’s take a look at Chicago, the home of this year’s NACS event.

In the video below, the green highlighted areas reveal the location of ‘innovators’; those consumers first to make the switch to electric vehicles.

EV chargers are currently clustered around areas of first adoption, transient routes, and the city center. In totality, this covers where EV drivers live, the journeys they take, and where they’re likely to work and shop.

But there are also opportunities. There are several major transient routes from areas with high early adoption that may be underserved with chargers.

Let’s take this a step further by looking at the existing fuel retail network.

One of the major stumbling blocks for retailers assessing the EV opportunities is knowing when to act. With just a few data points, we’re able to make more informed decisions about where there’s potential demand right now. If there’s site development or upgrade in the pipeline, those transient routes that are currently underserved by chargers could be prioritized for early deployment of EV facilities. Retailers could then layer in segmentation data to provide additional insight into the consumer, tailor their offering, and create a true EV destination to set themselves apart from the competition. 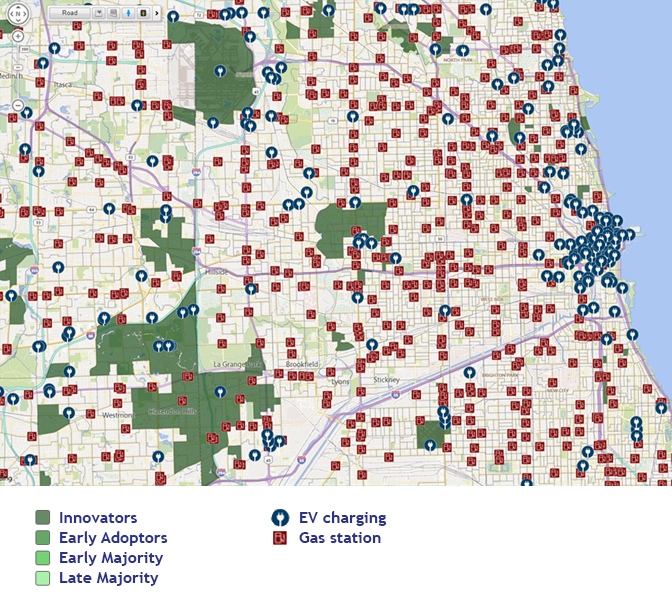 The adoption curve: Planning for tomorrow

While there are clear tactical wins in installing chargers for today’s market, the bulk of the opportunity exists in making strategic network planning decisions that capitalize on the white space in the market as adoption grows. We are entering the ‘early adopter’ phase, and not too far from the ‘early majority’. Here, we track adoption through the ‘early adopters’ towards the ‘late majority’ and mass ownership.

The adoption curve: Towards mass adoption

As we arrive at majority EV ownership, it’s become apparent just how much additional EV infrastructure will be required to meet demand. 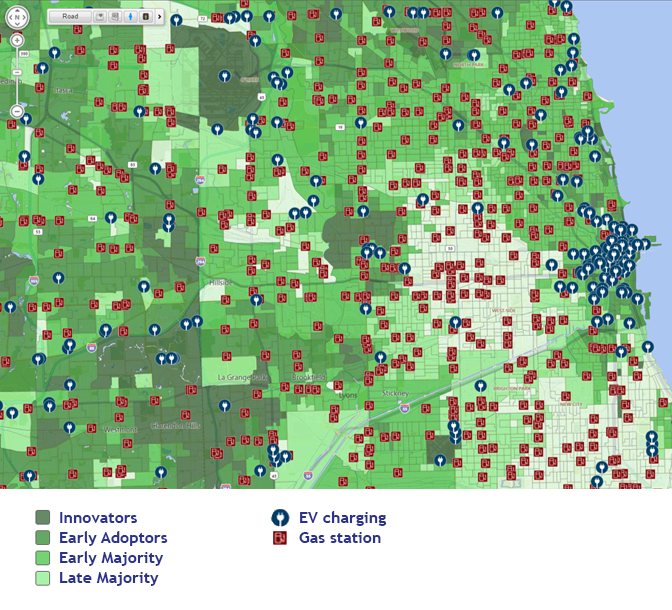 The opportunities on transient routes and at existing fuel locations are significant, and more granular exploration of the metropolitan center would reveal further potential. By considering where EV chargers are today relative to the locations that will see the greatest levels of adoption, strategic planning decisions can be taken by retailers to position their sites and their network for the drivers of tomorrow.

The insight gained from the adoption curve and the existing fuel and charger network can provide insight into which sites should be candidates for charger implementation. To delve deeper, we can layer more data inputs to start to identify which to prioritize. Location characteristics such as retail drivers, points of interest, the proximity of substations (to assess feasibility), and workday population, among others, can provide greater insight to rank locations according to potential ROI.

For retailers in fuel or non-fuel operations, the growth of electric vehicles represents a significant opportunity to drive new revenue streams by offering charging facilities on-site — but only if you know where and when to build.