With a decision looming, many Canadian fuel retailers have turned to Kalibrate to find out the impact of a potential Dakota Access Pipeline shutdown. Vijay Muralidharan explores the issue, looks back at the history of how we have got to this point and more importantly what you can do to mitigate the potential risks.

The Dakota Access Pipeline (DAPL) has been a subject of controversy for the past 5 years. The Standing Rock Sioux Tribe made international headlines with their protests that fought to stop construction of the pipeline. Legal battles commenced, but a permit was granted to allow the construction of the project to continue, and barrels of Bakken crude flowed freely through the DAPL.

With a decision looming, many Canadian fuel retailers have turned to Kalibrate to find out the impact of a potential Dakota Access Pipeline shutdown.

Vijay Muralidharan explores the issue, looks back at the history of how we have got to this point and more importantly what you can do to mitigate the potential risks.

Bakken crude oil is predominantly produced in North Dakota and is a light sweet crude similar in quality to WTI and other light sweet crudes produced in western Canada. North Dakota has been producing crude oil since the 1980’s, but advancements in shale extraction technology has revolutionized its production capabilities. Between 2010 and 2014, production from Bakken nearly tripled, to about a million barrels per day. However, during the same period the total pipeline takeaway capacity out of North Dakota was limited to just over 600,000 b/d, leaving the remaining barrels (marginal barrels) to exit North Dakota via rail (See Figure 1). Given that the quality differential between Bakken and other lights crudes is negligible, the transportation cost to move these barrels to market would ultimately determine the price of Bakken crude.

To satiate the need for growing production out of the Bakken region, additional pipeline capacity in the form of Dakota Access Pipeline (DAPL) started construction in 2016 and was commissioned on June 1, 2017. It is a 30-inch pipeline with a net length of 1,886 km connecting shale crude oil production in North Dakota to refineries in PADD 2 and PADD 3 via Patoka, IL. Its initial nameplate capacity was about 520,000 b/d., but since, its capacity has risen to almost 600,000 b/d. Following DAPL’s inception, Bakken price differential to WTI has tightened significantly, from -$11 a barrel to about -$4 a barrel. This tightening also resulted in smaller price differentials for Canadian crude prices, and in turn, has impacted Canadian refining margins. 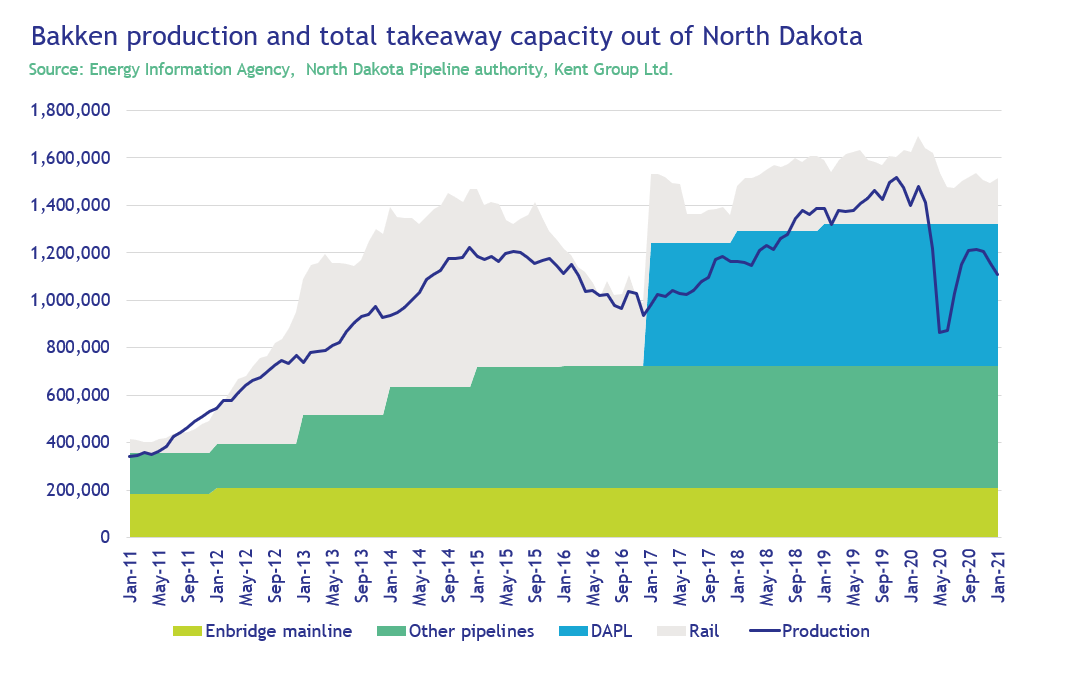 The refineries in Western and central Canada use western Canadian light crudes to produce gasoline and diesel. Hence, relative upward price movement in Canadian crudes can impact refined-product prices if those increases manifest in refined-product markets. Based on data over the last decade (2011 and 2020), for every Canadian dollar increase in the crude oil price per barrel, retail gasoline and diesel prices in Canada increased by about 0.55 cents a litre. However, we also observed that when the western Canadian crude oil price or Bakken price differential falls relative to WTI, the wholesale and retail gasoline and diesel prices seemed generally unaffected, all other things being equal.

Using this analysis, if DAPL pipeline were to be shut, this would likely revert Bakken supply and pipeline takeaway capacity to 2012/2013 level, where the marginal barrel produced out of North Dakota cleared by rail instead of pipe. This would effectively mean a lower relative price per barrel for Bakken or competing crudes like Synthetic and MSW light crudes. This lower price for western Canadian crudes may not necessarily translate into lower wholesale and retail product pricing (Gasoline and Diesel) in Canada, as historical evidence suggests. Given stable demand for refined products, lower crude oil prices are instead more likely to result in higher refinery margins. 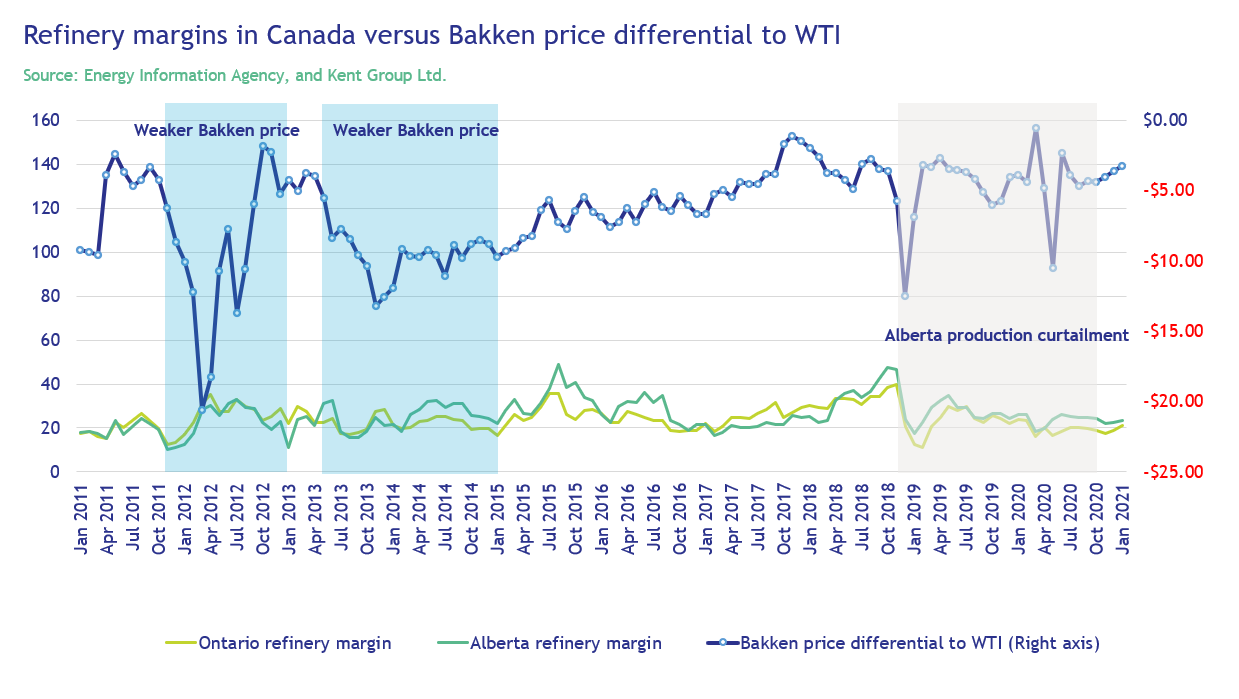 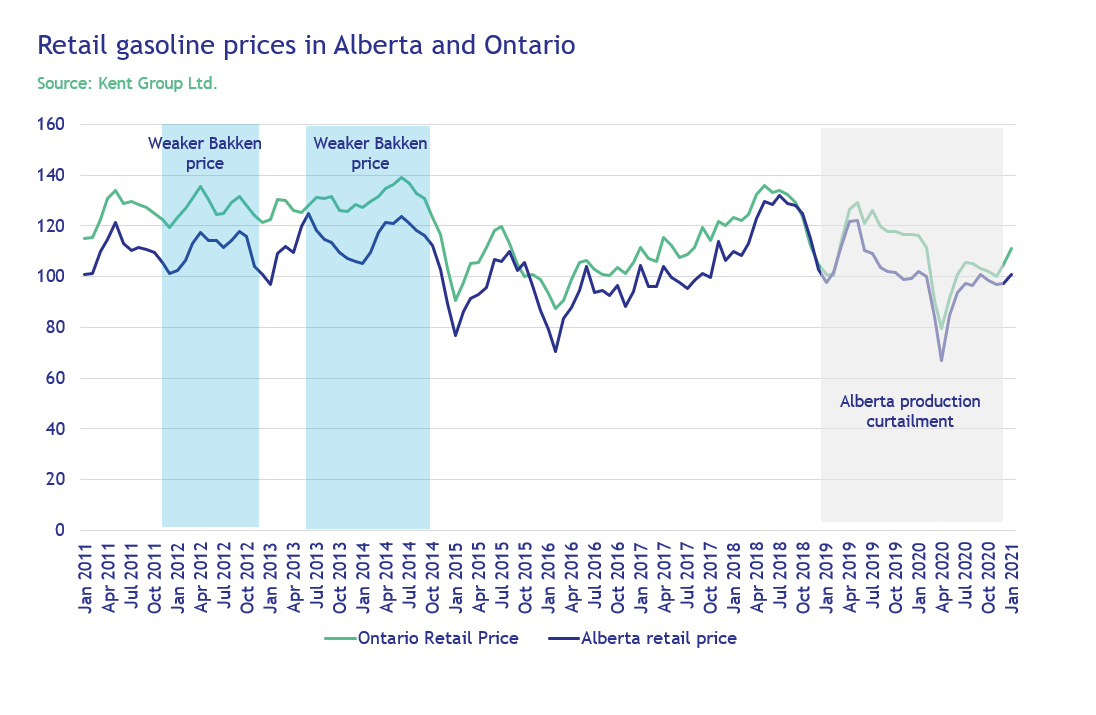 Historical data analysis can help to paint a reliable picture of the future. Kalibrate’s huge global data set, and experienced and knowledgeable team make them trusted advisors to fuel retailers in Canada, the US and beyond.

Combining comprehensive and reliable data with cutting edge data modelling allows Kalibrate to project the expected outcomes of risks, like the DAPL shutdown. Understanding the size and scope of a challenge before it materializes can help you to mitigate risks and turn your challenges into opportunities.

Contact Kalibrate today for more information on how the DAPL may affect your business.