Together in electric dreams: part one

The global electric vehicle (EV) market is growing at an incredible pace.

The global electric vehicle (EV) market is growing at an incredible pace. The vast majority of cars on the road still run on conventional fuel, but it is estimated that by 2040 battery powered vehicles will account for more than half of all new cars sold. The tipping point from internal combustion to electric engines may be inevitable.

Exactly how and when we get there is far from clear, but what’s certain is that fuel retailers, manufacturers, and energy suppliers must act now to prepare for a fuel future that looks very different from today.

In this blog series, we explore how far the EV market has come and where it’s headed, including the planning and pricing challenges providers must overcome to encourage further adoption and meet future demand.

The first and biggest driver is the move towards cleaner energy. EVs are increasingly seen as an important part of the global effort to improve air quality and reduce our carbon footprint. Governments are supporting EV development and adoption via a range of initiatives, including funding for charge point infrastructure and battery technology, road restrictions or outright bans for internal combustion engines (ICE) and EV purchase subsidies.

The goal is to get zero emissions models on the road to improve public health and limit the impact of climate change. The second biggest driver is the trend towards connectivity and the Internet of Things (IoT); a Tesla for example, feels like technology first, car second. Manufacturers are excited by the potential for data-led efficiencies and early adopters enjoy the status, novelty, and performance offered by the latest EV models.

The market has come a long way in a short time. Consumers enjoy more choice, higher quality, and lower cost than ever before.

From early hybrids, through to plug-in hybrids, and now high performance pure battery powered vehicles; quality manufacturers are creating a dizzying variety of new models. And we’re not just talking basic car models, we’re starting to see SUVs, vans, and even high performance sports cars on the roads. According to Bloomberg, there will be 120 pure EV models on the market by the end of 2020. And as the number of options rise, so will demand. 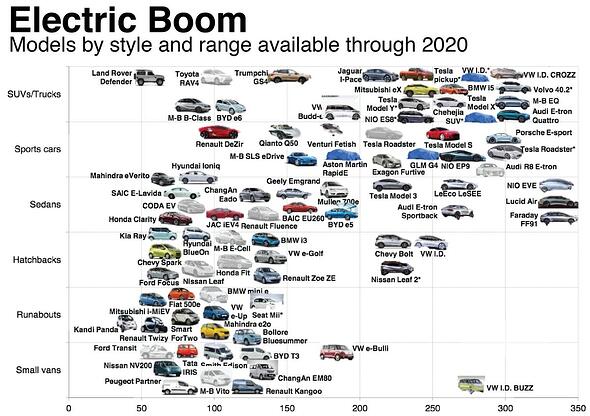 Innovation in battery technology is extending driving ranges while making EVs more affordable. Initially, EVs could manage around 100 miles on one charge. Now 200 is the minimum. A lot of the newer models have range of 300+ miles—that’s the same as many ICE’s. And soon they’ll be the same price, too. It’s estimated that cost parity will be reached in the early 2020s.

China, Europe, and the US are the biggest markets. There has been huge growth in the US, most recently with the launch of the Tesla Model 3. According to EV Volumes this was single handedly responsible for over 60% year on year growth in the US EV market in 2018, and still one of the fastest selling cars today with 4 out of 5 BEVs bought in the US from Tesla, with the Model 3 standing for nearly half of all plug-in sales. 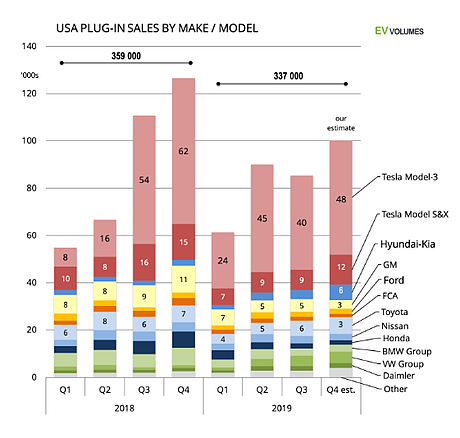 This growth is also being seen in Europe with advances in the availability of more makes and models. While Tesla’s position in Europe is not quite as overwhelming, almost half of the growth in 2019 came from Tesla. 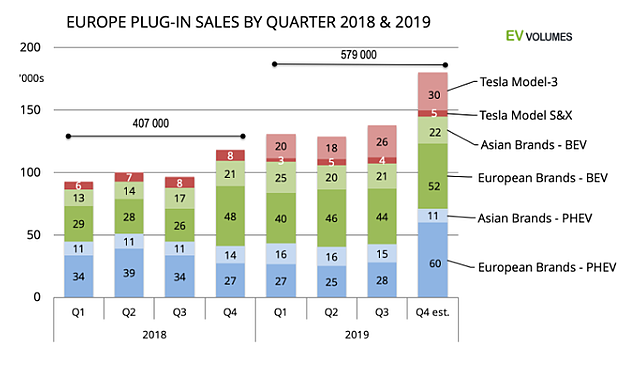 But, no one comes close to China, in production or sales. The Chinese government has outlined a goal of reaching 7 million in EV sales by 2025. This is driven by a huge market and considerable government support, including: 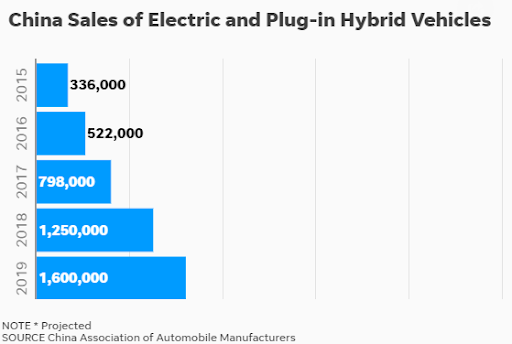 However, despite all this growth, only one in 250 cars on the road globally is electric.

Why should fuel retailers care?

It is estimated that five million pure battery powered electric vehicles (BEVs) will have been sold this year. That’s 2.1% of global light-duty auto sales.

The growth is respectable, but not threatening the status quo. However, a surge is coming. 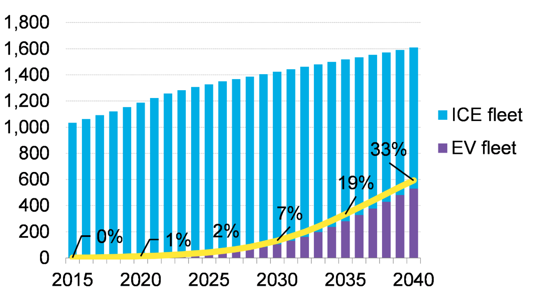 EV’s are projected to have around 35% market share of total global fleet by 2040
Source: Bloomberg NEF 2018

In the next seven to eight years, analysts predict the market will move past the “early adopters” phase, powered by better battery technology and price parity. By 2040, 33% of all cars on the road will be EVs. And 55% of all cars sold will be EVs. In the biggest markets, sales will be higher (US 60%, Europe 67%, and China 69%).

That’s just passenger cars. Commercial fleets are growing at an even faster rate. This will have a huge impact on fuel retailers.

How are all these EVs going to be charged?

Charge points. And lots of them. Public charge points are essential to support widespread EV adoption.

Currently, most EVs are charged at home. Uptake is slower in densely populated areas where more people live in apartments and have less access to public chargers. Fortunately, the global charge point market has seen factor 10 growth in the last five years. Fuel suppliers, auto makers, utilities companies… Everyone is investing in infrastructure. 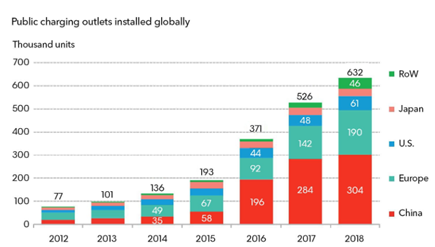 There are over 630,000 charge points globally. Not surprisingly, half of these are in China. It’s a lot but not enough. And most aren’t fast enough! Solutions like battery swaps and wireless charging are emerging to improve public charging. But the key factor, after availability, is speed of charging.

Up until a few years ago, most chargers were below 50kWh. Vehicles would take hours to fully charge so most public charging took place in workplaces and parking garages—as opposed to fuel stations—where this time wasn’t such a problem. The focus now is on fast and ultra-fast charging, anywhere from 150kWh and above. With the latest 350kWh chargers, compatible vehicles can be charged within 15 minutes. That may still too slow for fuel stations, but promises much higher rates of adoption.

The availability of public charging may encourage drivers to switch to EVs. However, despite the considerable emphasis placed on public charging to drive EV acceptance, public chargers are only used for about 5% of charging events.

Why? It’s harder to anticipate demand for charge points as accurately as demand for conventional fuel; the market is changing so much faster. Also, installing charge points is a big investment and many retail businesses can’t justify the initial cost, or are not prepared to give up the parking spaces.

Nevertheless, the opportunity remains huge. Many of the businesses investing in charge points today are not expecting quick returns. They’re preparing for the 2040 tipping point when EV sales overtake conventional vehicle sales.

So, how will charge point networks evolve and what will be the impact on fuel sales?